Who among us doesn't have a bitter word or two to fling bankwards? Since Jesus' time, money-lenders have rarely stood among the honourable, ever-famous for their command of the language of avarice and rejection. But besides signing up for mattress economics, what voice does a poor man have against such a monolith as any of our five national banks. Not much of one at all, I thought, until I met Vancouver performance artist A. Lebut. 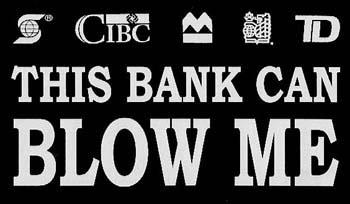 For years, Lebut was like most of us, quietly seething at each new greedy gesture wrought in the name of obscene profits. His bank charged him whatever they wanted for dwindling services while simultaneously refusing to cash his cheques without a customary five day hold. They offered him minimum interest when borrowing his money and maximum rates to lend it back to him, and because he didn't have very much, they took it upon themselves to charge him more and offer less.

Every camel in heaven can tell you exactly which straw it was that finally broke his back, and Lebut is no different, "My income is pretty grey for the most part," he admits, "and there's lots of people who would like to get their hands on the little I've got. So I avoid them as much as I can. Even still, sometimes you have no choice but to use them, and when you do, what a pain in the ass."

"I always walk out of my bank madder than when I went in," he explains, "They're just so smug and unreasonable. Then not too long ago I went into a Bank of Montreal to cash a very rare cheque from the CBC. I don't bank there, but it's close to my house and it was drawn on one of their corporate accounts. I had a wallet full of ID but they still wouldn't cash it, and I thought, 'You bastards. That's not your money, that's my money. It says so right here.'"

So Lebut did what any other angry Canadian might do in his place. He created a foundation, called it Bank-B-Gone, and began devoting his life to making a nuisance of himself "I have a fair amount of time on my hands, being 30 and under-employed and all. (We're) breaking national records for bankruptcy and youth unemployment, and meanwhile, the banks are gobbling up record profits. Every quarter it seems they announce yet another yardstick for profits while the line-ups at the food-banks just keep getting longer."

I asked about the main thrust of the campaign, a stark white sticker with bold capital letters stating simply, 'This Bank Makes Too Much Money.' Lebut explains, 'I came up with a bunch of different tags and printed them up at home, things like, 'This Bank Steals', or 'This Bank Has Nothing To Offer'. But I think the straightforward 'This Bank Makes Too Much Money.' pretty much says it all. 'Kill More Bankers' has a nice meter, but it's a little extreme. 'This Bank Can Blow Me', is a lot of fun but that's a bit more of a specialised statement."

He's quick to point out he's neither a communist nor a crusader, "It's not that I'm against money, I like money, I wish I had more money. But they're just so rude."

His targets so far remain the big five national banks, or 'Fat Five' as Lebut calls them; the Royal Bank, Bank of Montreal, CIBC, Toronto Dominion and ScotiaBank. "They're the biggest and the worst, but really, they're all the same. They're like politicians in that respect."

"There are other companies deserving of our attention," Lebut maintains, "BCHydro made $157 million last year as a crown monopoly providing what no reasonable person would dispute is an essential service, yet they're sending out disconnection notices for outstanding balances over $50, and following up on them. With an eighteen percent service charge to boot."

Lebut admits the campaign is very much in its infancy, limited to passing out stickers he prints up at home and keeping an antagonizing presence on the internet. He's a self-proclaimed 'spammer', his regular postings earning him attention from foreign press and international letters of support.

"I like the idea of a sticker campaign," he says, "They're like instant opinions, just peel, stick and serve. ATM machines are great targets, especially since the people who see them are caught in the very act of being fleeced. They look up and see the sticker and think, 'Yeah, you're right, this bank does make too much money. I just paid a dollar for that and I only came here cuz I was broke.'"

A few Vancouver artists who have donated their own talents towards the campaign. Ted Dave, local master of irony and irreverence, is working on graphics and t-shirt designs, while Vancouver song-writer Dan LaRocque has penned the rock classic, 'I Declare, (In Three And A Half Minutes Or Less).'

The song has been recorded by Vancouver sleep-rocker, Larry, and Lebut plans on releasing it as a single under the Bank-B-Gone umbrella. "It's kind of a 'We Are The World' thing," he says, "without all the self-righteous rich guys. And it kicks way more ass of course."

The t-shirts in question sport your choice of one of the five banks' logos, married to the slogan "This Bank Makes Too Much Money." It's a blatant copyright infringement, and I suggest to Lebut that since he's taken on such a power-hungry adversary, mightn't he expect some legal repercussions? "Fuck 'em," he says, "What are they gonna do, sue me? Take a number. I suppose if they wanted to they could pay someone to rub me out They could write it off as a business expense. But that's not their style. The worst thing they can do is cut off access to my money. Except I don't have any, so I guess the joke's on them."